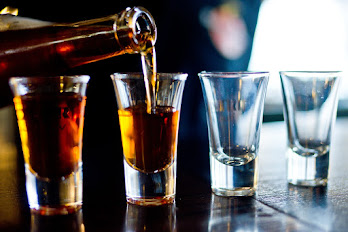 Al Khamr literally means closed. Khamarahu means satarahu (covering it). From here is taken the word khimar which means veil (head covering) and the word khamr which means drink kears (alcohol). It is called so because people who consume alcohol will cause their minds to be closed so that they can not remember anything aka drunk. More specifically, Rasulullah SAW looked at khamr (alcohol) not in terms of the material used to make khamr (alcohol), but looked at in terms of the influence it caused, namely intoxicating. Due to alcohol (alcohol), any brand and name used by humans can be punished illegally.

Khamr defined by Raslullah SAW is something intoxicating that can lead to loss of mind. Though the intellect is an organ that functions to control and restore the movement of the whole limb. And Islamic law also asserts that drinking khamr is good a little more or more then the law is haram.

Rasulullah SAW said: “Any drink if the amount is intoxicating. So the slightest is haram. ” (HR. Ahmad, Abu Daud, and At Tirmidhi)

Therefore, it is not surprising that Islam views khamr as ummul khabaits (source of all abominable deeds) and miftahu kulli syarrin (key to all disobedience). Because, if a person's mind is closed by the influence of alcohol, he will act out of control. Any crime he can commit, such as fights that do not infrequently end in murders and other crimes that can disrupt the peace and disturb the community and the environment.

"O you who believe, indeed khamr, gambling, sacrificing to idols, voting for fate with arrows is an abomination and an act of satan. So stay away from those deeds so that you may have good fortune. Indeed, the devil is only meant to cause enmity and hatred between you because of khamr and gambling, and want to prevent you from remembering Allah and prayer; then stop. ”

From the above can be taken a brief conclusion about khamr :

1. Khamr (alcohol) is rijsun, something vile and dirty (najis).

3. Khamr (alcohol) is always dragged to acts of evil, enmity, and hatred among human beings.

5. Khamr (alcohol) in all its forms and levels is haram, so Allah commands man to stay away from it.

Before the verses of the Qur’an surat Al Maidah: 90-91 came down, the Arabs were accustomed to drinking khamr, even khamr included part of their lives, including the Companions. However, after Allah forbade khamr through His words above (Q.S Al Maidah: 90-91) they immediately left it. The Prophet (peace and blessings of Allaah be upon him) said:

"Indeed, Allah has forbidden khamr, so whoever knows this verse and still has khamr even a little, then do not drink and do not sell." (HR. Muslim)

The narrator of this hadith explains, that the companions then simultaneously spilled all the liquor in their house. According to historians, a few moments after the revelation of the verse that forbade khamr, at that time the city of Medina 'flood' was flooded with khamr water spilled by Muslims while shouting, "Intahaina ya Allah!" (We have shunned him, O God!).

Sahabat Ali bin Abi thalib ra even had time to say, "If a drop of khamr (liquor) falls into the sea, then the sea is dry, then grows a tree whose fruit can be eaten, then if only my tongue had dried up thirst and my stomach screamed hunger, I will definitely not approach him. "

Such a firm attitude was also shown by the companion of Umar bin Khatab r.a in front of the crowd he exclaimed, “By Allah! If a drop of khamr fell on my hand, I would have cut off my hand and released it from my body. "

They also intercepted and carried out ‘raids’ of people who were still storing or selling khamr. Then they pour it out on the ground or throw it into the ditch. The companions performed the khamr eradication movement because Allah SWT and His Messenger had forbidden it, and also saw the danger that the khamr could cause (especially for the drinker). That is, the emergence of various kinds of evil and disobedience that are very detrimental to human beings, both those who consume it and others. In addition, the companions are very confident that God will not forbid anything, if there is no harm in it. "Indeed, Allah has never wronged man, man himself has wronged himself."

In the study of Islamic Shari'ah it is well known that the application of Shari'ah by Allah SWT for human beings has it juan (maqashid syari'ah) which is very meaningful for human beings, among them is to preserve the intellect, that is by forbidding all that disturbs or eliminates the intellect.

Once again it needs to be emphasized that MIRAS (liquor), whatever its form, name or brand then the law of consuming it is illegal. Narrated by Ahmad and Abu Daud from Abu Malik Al Asy'ari,

Indeed, he (Abu Malik Al Asy'ari) had heard the Prophet SAW say, "Surely people from my ummah will drink khamr and they will call it by other than his name (other than khamr)." (*)